This is the first two novels in ‘The Book of the New Sun’, comprising ‘The Shadow of the Torturer’ and ‘The Claw of the Conciliator’.

In them, we follow Severian, a torturer’s apprentice, through strange lands filled with Wolfe’s wondrous imagination, alongside tiny echoes from a bygone and long-forgotten age. Ours.

It is most definitely SF, though it may not necessarily read like it a lot of the time; with its monsters, the hero’s quest, swords and magic, it could be deemed to lie more on the Fantasy side of things. However, the monsters are perhaps aliens, the exotic flora and fauna from other worlds, the magic advanced technology – and there are spaceships. Plus, the moon has been terraformed (‘lunarformed’?) to bear plant life and thus glows green at night. You don’t get much more SF than that.

The dialogue and characterisation are beautifully done. The protagonist is sometimes admirable and sometimes quite unlikeable, which makes him very human; not surprising given, for example, his status in this world (arrogance), the fact of his torturer’s apprenticeship (emotional suppression), and his strange memory (which can have all sorts of effects). Indeed, memory itself plays a fascinating role in this tale, all on its own.

The worldbuilding of this darkly entrancing place is second to none, excluding (of course) Tolkien, and the narration is at turns gripping then sublime, raw then beautiful. Wolfe even plays with the narration, itself.

These are poor, broad strokes attempting to convey the detail and layers that are in this work; the story seems peppered with little details that I am sure I will need a full re-read to totally understand the significance of, and appreciate.

I actually bought volume two (‘Sword and Citadel’) before I had finished the first book in this volume, and can understand why Le Guin called it ‘a masterpiece’. I can’t wait to read the rest.

What a great read. 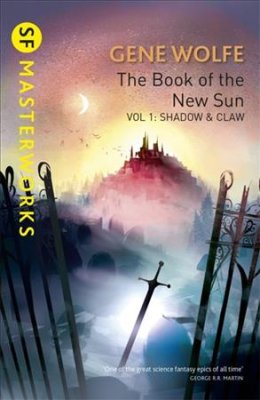 An extraordinary epic, set a million years in the future, in the time of a dying sun, when our present culture is no longer even a memory.

Severian, a torturer’s apprentice, is exiled from his guild after falling in love with one of his prisoners. Ordered to the distant city of Thrax, armed with his ancient executioner’s sword, Terminus Est, Severian must make his way across the perilous, ruined landscape of this far-future Urth. But is his finding of the mystical gem, the Claw of the Conciliator, merely an accident, or does Fate have a grander plans for Severian the torturer . . . ?

I do not get paid for reviews or blog tours and this is my honest feedback.

One thought on “Review: ‘The Book of the New Sun, Volume 1: Shadow & Claw’ by Gene Wolfe”